Hong Kong billionaire Joseph Lau shelled out a record $48.5 million to buy the “Blue Moon” diamond at a Sotheby’s auction Wednesday, renaming the 12.03-carat diamond the “Blue Moon of Josephine” in honor of his daughter. 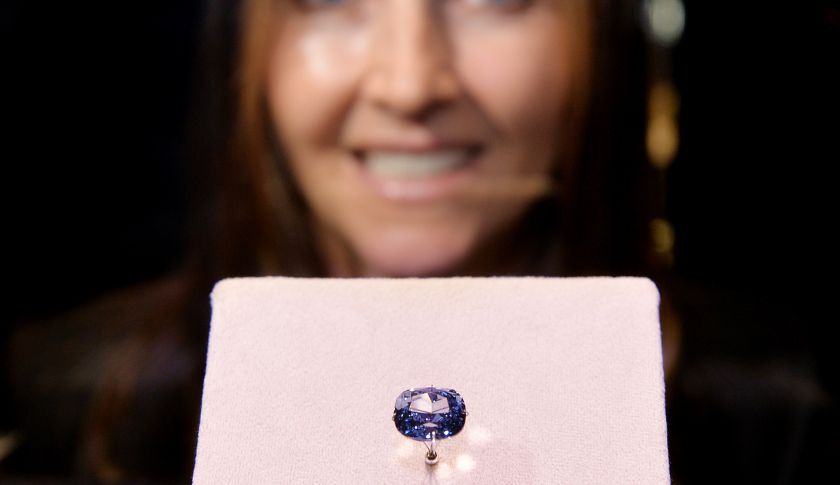 Suzette Gomes, CEO of Cora International, poses with the 12-carat “Blue Moon Diamond” which is on display at the Natural History Museum in Los Angeles on September 12, 2014. The ‘Fancy Vivid Blue Diamond’ which are extremely rare was discovered in South Africa. AFP PHOTO/Mark RALSTON (Photo credit should read MARK RALSTON/AFP/Getty Images)

The sale makes the diamond the most expensive jewel ever sold at auction, according to Sotheby’s  BID -0.31% . It also netted the highest-ever price per carat—over $4 million.

The previous record for the most expensive jewel bought at auction was for a 24.78-carat pink diamond dubbed the “Graff Pink.” It sold for $45.6 million in 2010 to Laurence Graff, a London jewelry dealer.

Lau, a 64-year-old property tycoon, also paid $28.5 million for a 16.08-carat pink diamond earlier this week that he renamed the “Sweet Josephine,” also after his daughter, reported the Guardian. That adds to a growing collection for young Josephine. Lau bought a blue diamond in 2009 for $9.5 million, naming it the “Star of Josephine.”