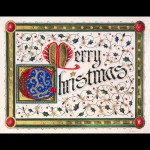 This Christmas, Miami-based greeting card manufacturer Gilded Age Greetings is offering hand painted cards, in which the lettering is from gold and the decoration includes diamonds, rubies and sapphires. A single card could put you back a cool $5,000.

Other gemstones are used as well in the company’s Grand Couture line. The pigments used are made of lapis lazuli and malachite and other cards include amethyst, and green and red garnet.

Each card comes in its own silk box, with documentation that is specific to it, such as the title of the piece and a materials list including gemstones.

Also included is a set of white gloves for proper handling of the greeting card. 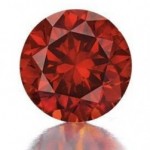 The reddish-orange diamond of 3.15 cts,. which sold at Christie’s in New York on December 10 for $2.09 million. (Photo Credit: Christie’s)

Record-breaking Christie’s auction sees red diamond sold for $666,200 per carat
The final lot in the sale at Christie’s auction house in New York on December 10 was possibly the most eagerly awaited. It was a rare diamond of 3.15 cts., which was said to be the largest reddish-orange diamond ever graded at the Gemological Institute of America.

It is not the largest red diamond is existence. The gem collection at the Smithsonian Institution in Washington, D.C. boasts a circular-cut 5.03-ct. fancy dark red stone.

The most expensive lot was a white rectangular-cut diamond, weighing approximately 50.01 cts. It was graded with a D color, VVS2 clarity, and came with a pre-sale price estimate of $7 million to $10 million. Set in a platinum ring crafted by Graff Jewelers of London, it included two tapered baguette-cut diamond side stones.

And it was Laurence Graff himself who bought the 50.01-ct. diamond, for $8.37 million. “This is the third time that I have owned this beautiful diamond and I am as thrilled today as I was the first time,” he said after the sale.

Christie’s had a good day. The jewelry sale sold goods for a total of $32.5 million, with sell-through rates of 84 percent by lot and 86 percent by value.